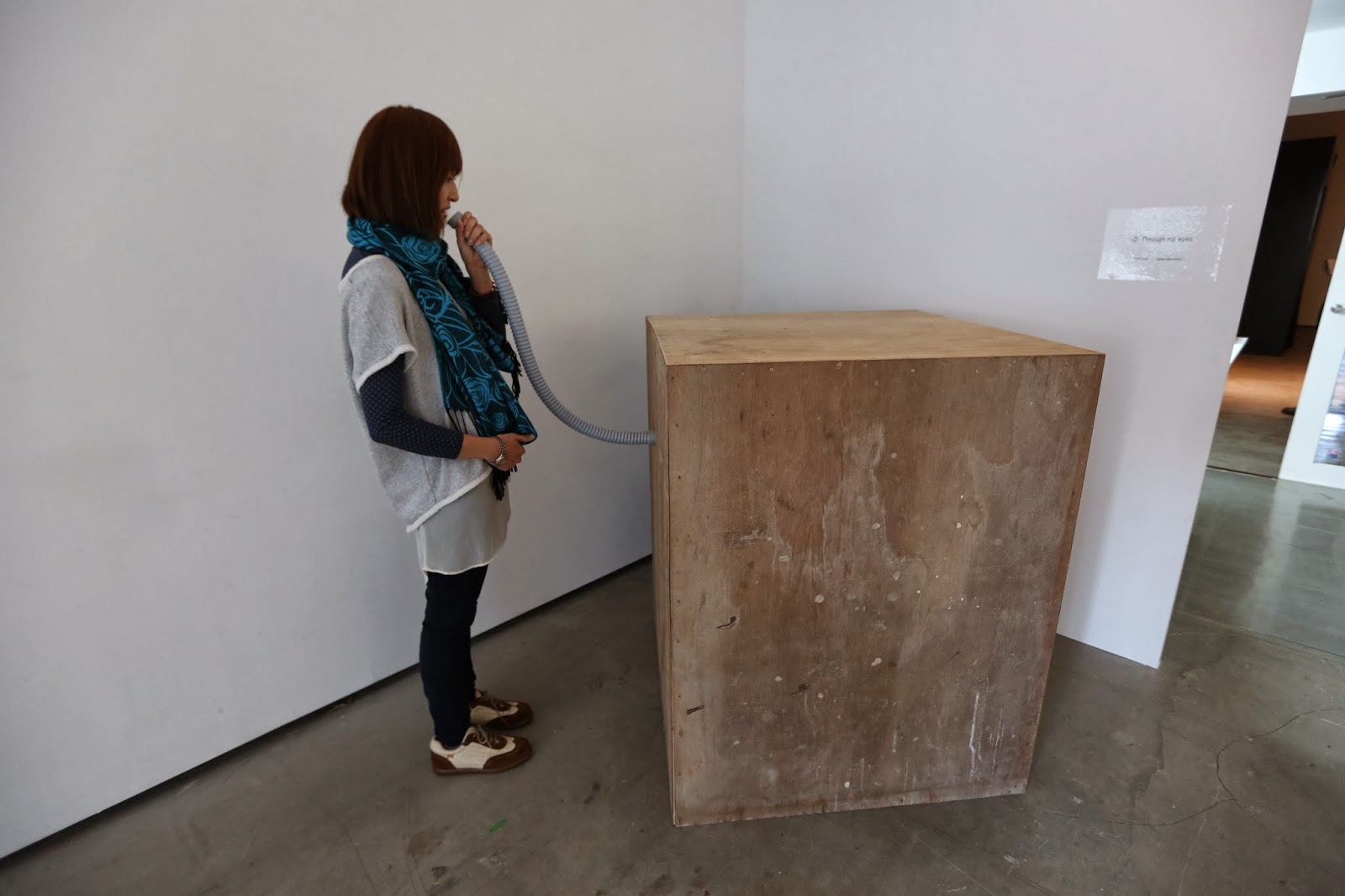 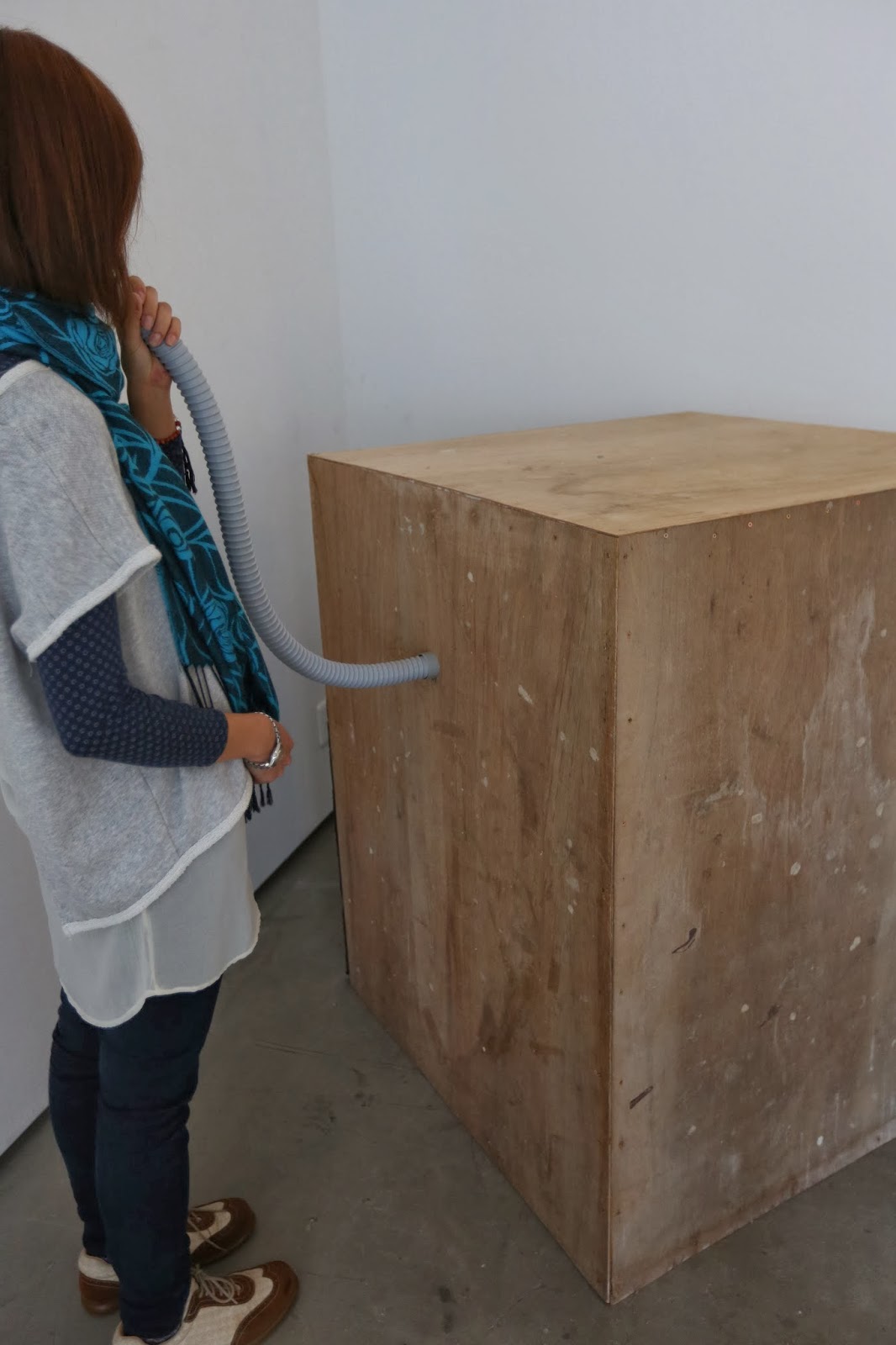 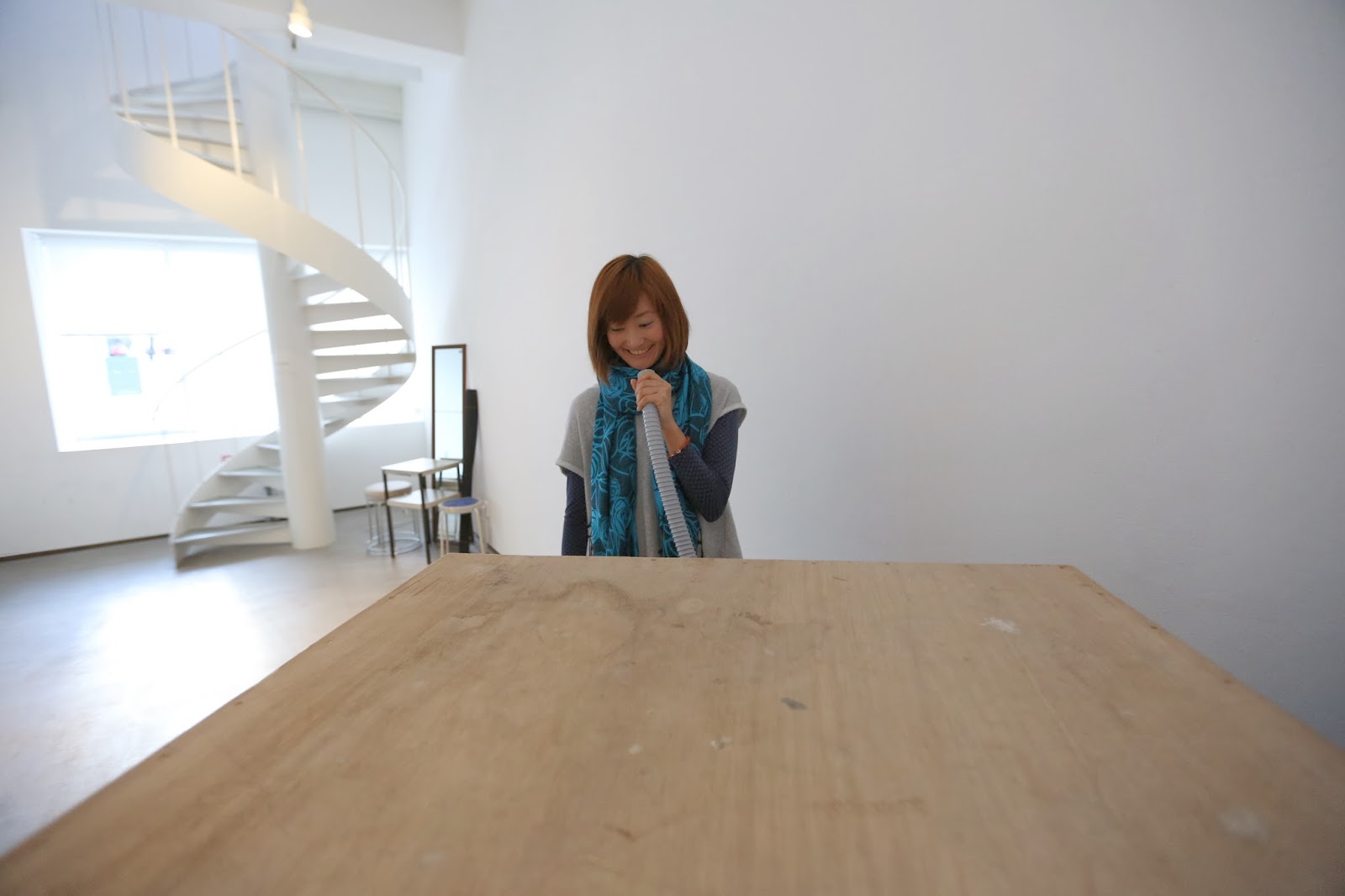 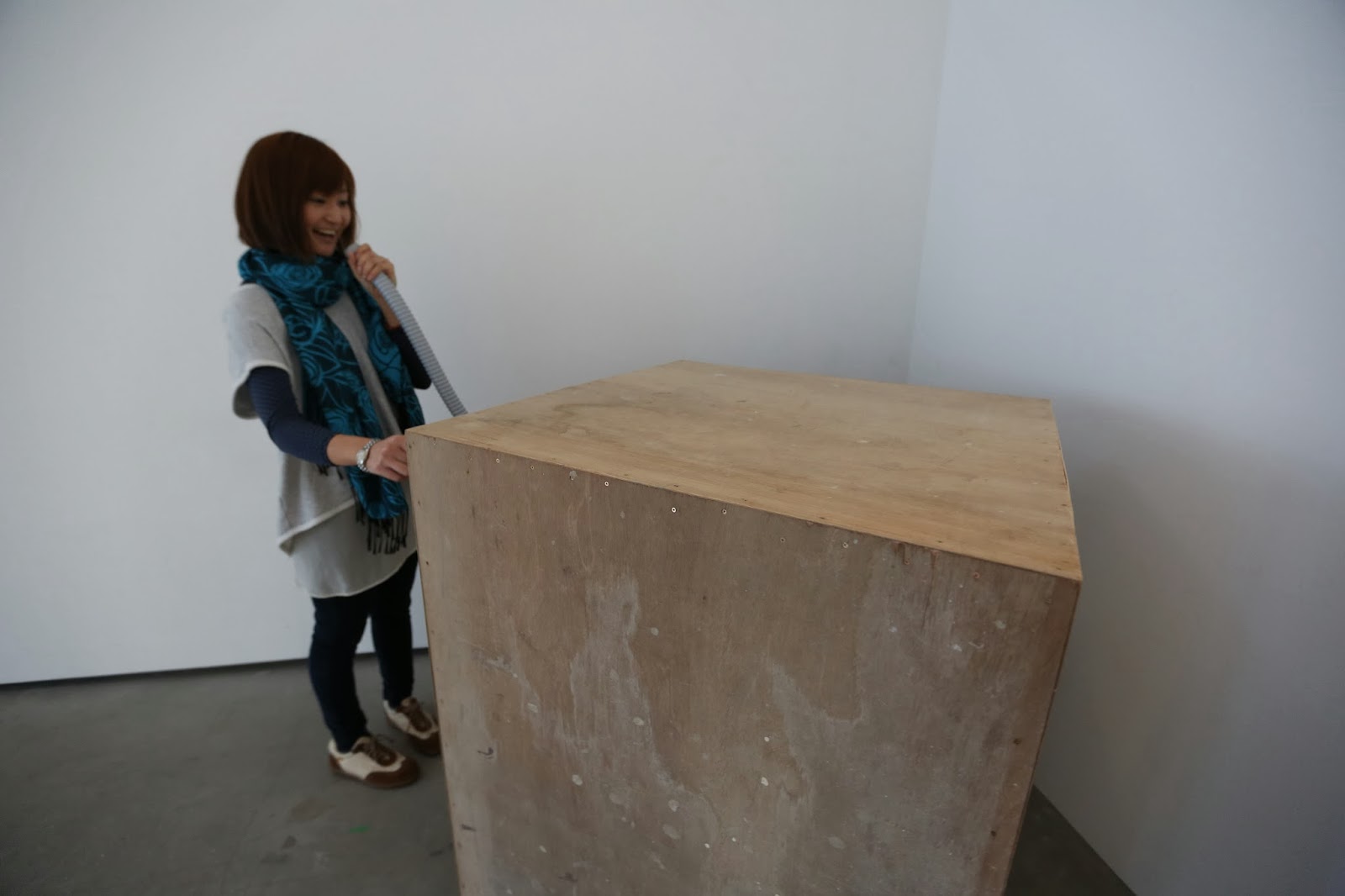 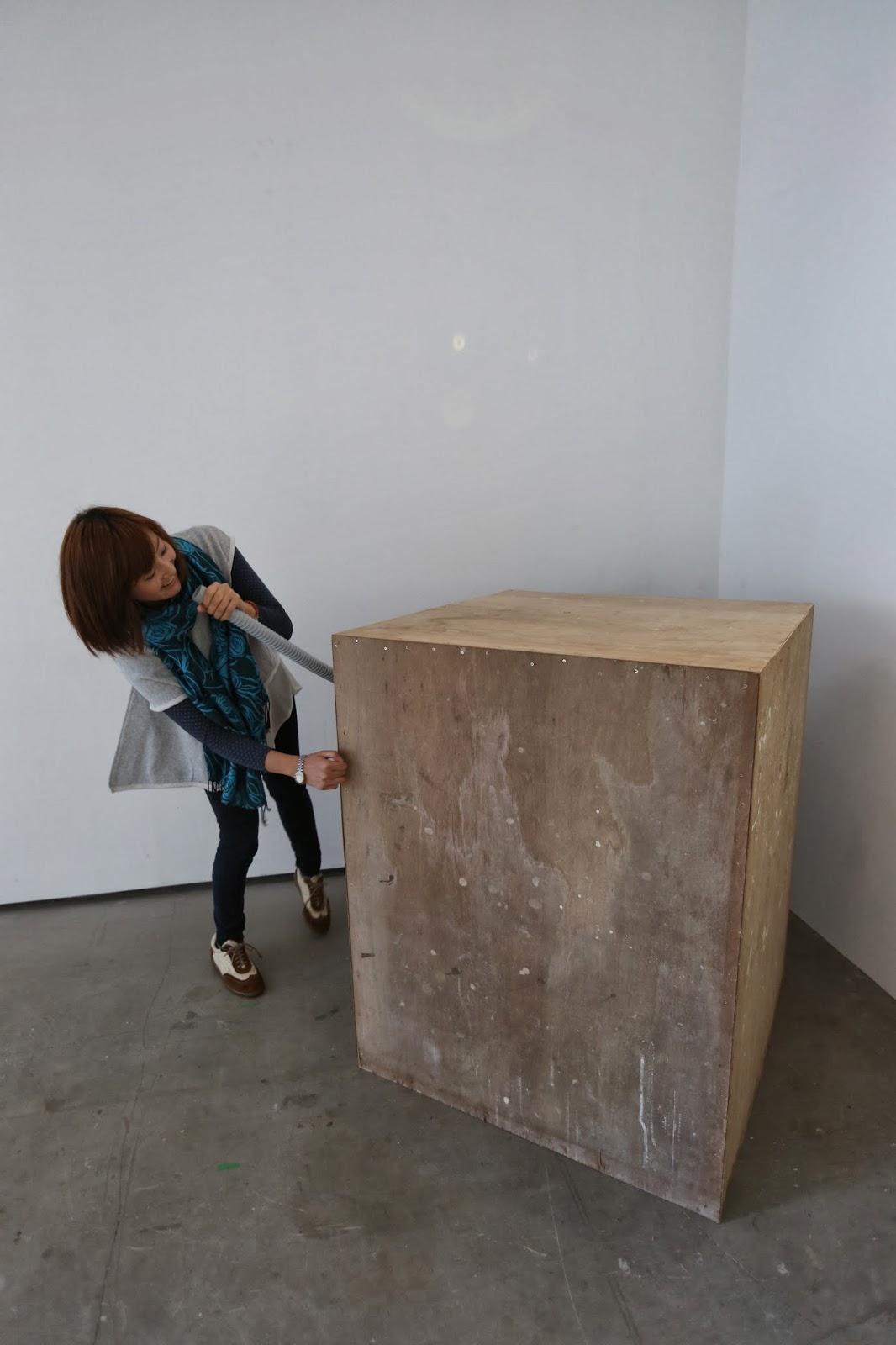 [Descrption]
KINO-SHITA is a flute and contemporary musician, used to play from classical composers to experimental contemporary music. As a wonder, his very experience of playing and expressing through music at the same time as he sees the reactions of the people in the audience. Only he can see this. In a box, with a connecting tube hanging outside it, stands Daiske's particular sound system. The visitors can produce any sound and it will become music. This way, while trying different sounds, the visitors make a short concert with the box for the small audience of visitors that accompanies them.

[Artist Statement]
In the scene of contemporary art music, it is rare to have an ensemble piece to be performed again after its première. There are a lot of possible causes for this circumstance. However, the main reason could be the lack of consistency in notation method. The standardization of a notation method would provide an easier access to the music for other performers who did not premiere the piece. This would also minimize the lost of artistic possibilities through transmission. Furthermore, the standardization of notation would also provide the space for further development of the art.

[Biography]
Daiske KINO-SHITA was born in 1977 in Kanazawa, Japan. He pursued his music studies at Hamburger Konservatorium (as an Absendungsstudent of the Ishikawa Prefecture), and Hochschule für Musik und Künste Bremen (with Hiroshi Koizumi, Juergn Franz, Helen Bledsoe, and Harrie Starreveld). He is a four-time finalist at the Japan Contemporary Music Competition, at which he received the jury special prize twice. For his ensemble experience, he was the principal flutist of Guiyang Symphony Orchestra. Contemporary music festivals in which he has played in include the Donaueschingen Festival pre-stage, East Asian International Contemporary Music Festival and Suntory Summer Music Festival. Currently, he is the chairman of Asian Contemporary Music Society (ADOK) and a lecturer at Fukuyamaheisei University.
He was Local Creator in Residency at TWS Ayoama: Creator-in-Residence.